As is quickly becoming a theme with the excerpts we read, I found the excerpt from Vandana Shiva’s Tomorrow’s Biodiversity a little melodramatic. She brought up several points that I agree with – more than I expected after reading the opening few paragraphs – but once again I felt that the argument was weakened by writing in the “STOP TECHNOLOGICAL PROGRESS OR WE ALL DIE” style that has apparently become fashionable. If we were in danger of extinction then obviously we would want people sounding alarms but the meat of her argument doesn’t support that, therefore a more measured “or else” should have been used in my opinion. 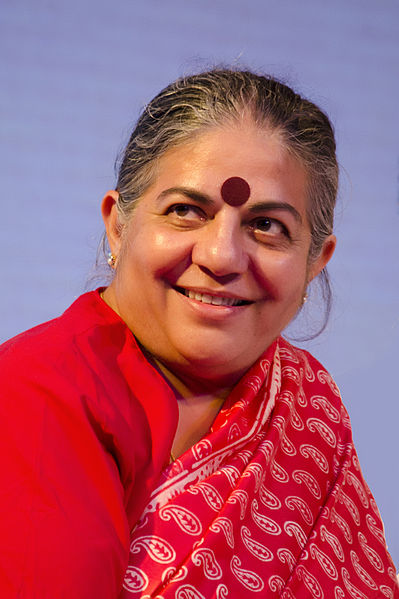 The part of the excerpt that I agreed with most was “Only one per cent of all the genetic material of higher organisms is known to relate to the form and function of the organism. We are still ignorant about the role of the remaining 99 per cent, but, in our usual human arrogance, instead of referring to our 99 per cent ignorance, we refer to the 99 per cent ‘junk’ DNA.” (pg 42) You see this attitude constantly in science and it’s a real detriment to the scientific method. There are several quotes from classical thinkers about how little we, as humans, know but my favorite is one by Socrates: “True wisdom comes to each of us when we realize how little we understand about life, ourselves, and the world around us.” At every point in history the people of that time thought that not only they knew a good deal about the world around them but they assumed that they had corrected all the errors of past generations and everything they thought they knew was correct until the next generation comes around, corrects them, and the cycle begins again. One wonders what we think we know that will turn out to be patently false.

One part of the excerpt that I particularly disagreed with was “The extinction of a species means not just the loss of that particular species, but also a threat to the other species that are supported by it through ecological processes. When one plant becomes extinct, with it disappear the twenty to forty animal and insect species that rely on it.” (pg 45) While on its face this seems perfectly reasonable, logically it must be wrong. Shiva noted four pages earlier that the current extinction rate is 27,000 species per year and that that is 1000 times the natural rate. However, that means that before humans started greedily committing biological genocide there were 27 species going extinct each year which should mean, by her logic, that those 27 species wipe out over a thousand other species that are dependent on them and, in turn, those 1,080 species cause the extinction of 43,200. In just a few years out of millions we’re already above the human-caused extinction rate. This leads me to think that plants and animals are more resilient about adapting than we give them credit for.

The most interesting part of the reading was definitely on page 49 where Shiva lists some startling statistics about monoculture. A few examples:
“In Europe 80 per cent of all farmland is sown to just four crops.”
“In the UK three varieties of potatoes make up 68 per cent of the crop; one variety makes up the remaining 32 per cent.”
“In Sri Lanka, 2,000 varieties of rice were cultivated in 1959, but only 5 major varieties today.”
Even if these numbers are cherry picked or massaged in favor of her argument they are high enough to still be shocking if you allow for a bit of error. They’re so shocking that when I first read through the list I didn’t believe them but after reading up on Shiva she seems to be a fairly credible source. Just unbelievable.